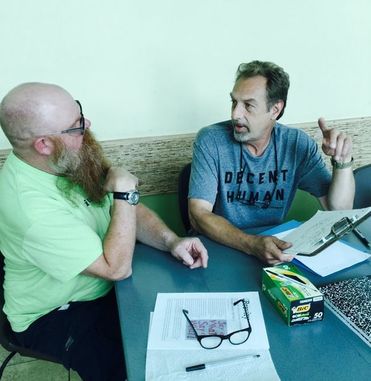 That's me on the right, with W. Joe Hoppe, Austin's "Mopar Poet."
Creative Writing Workshops
The Street Lit Authors Club offers free creative writing workshops at the Poverello Center in Missoula, and in Austin at the Austin Resource Center for the Homeless (the ARCH). We aim for a safe, non-judgmental environment, working with folks on any and all forms of writing, and at any level of expertise. The workshops lend encouragement, foster open expression, and honor the strength of all our stories and imaginations.

Hi. I'm Barry Maxwell, the founder of Street Lit and the Street Lit Authors Club workshops. The project began in 2013 in Austin, growing from a one-off book drive into an ongoing donations hub serving the ARCH and homeless population there. I started the creative writing workshops in June of 2015 and was fully prepared to fail. I had no idea whether anyone would show up, or how long it would last. I'm proud to say that the workshop thrived from the first day, and even after my move to Missoula to join the MFA cohort at UM, the Austin group is still going strong under the gifted guidance of my friends Tony Nuñez and Phil Force. (The duo has a great site running for the group at http://streetlitauthors.org/. Give them a visit and get in touch there for donations in Austin.)

The workshop in Missoula is still young. The first was in early May of 2018, and I'm happy to report that the group is growing steadily. A core of regulars are bringing their writing projects to the table, and the word is spreading. New folks drop in out of curiosity (or for the coffee) and then come back for the writerly conversation, the chance to share their own words, and to join in the discussion of others' work. As it was back in Austin, I walked in braced for failure, and found instead a community waiting for way to connect. I couldn't be more thrilled with the progress we’ve made so far. 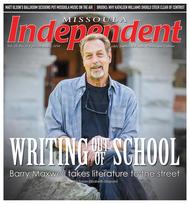 We’ve enjoyed a warm response from the press, both locally and in the wider literary world. If you’d like to look further into Street Lit’s origins and daily reality, please give a read to our friends and supporters: